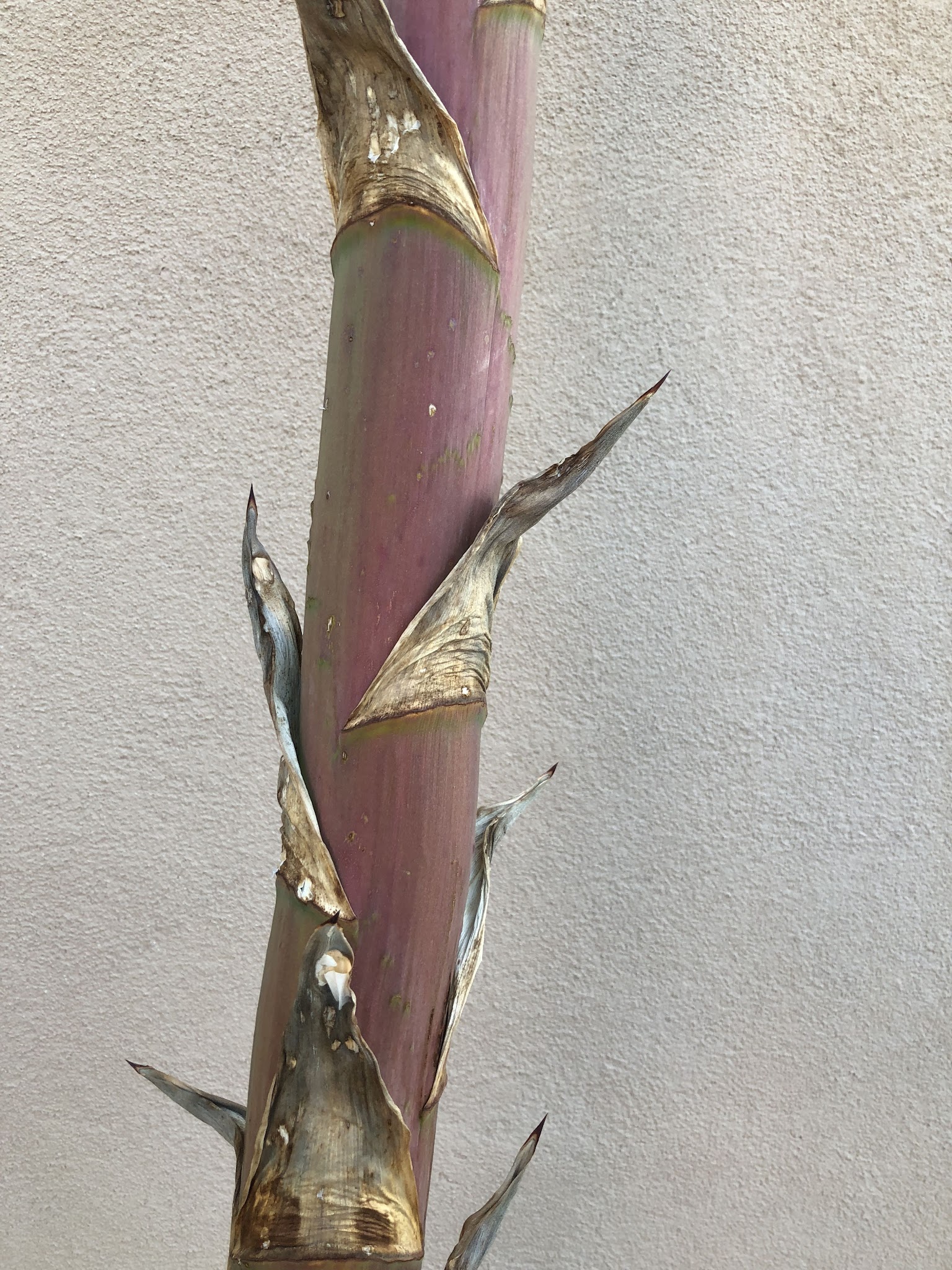 Ouch! Ouch. That damned
succulent had to go, I thought angrily, after it had poked me yet another time.
The sage-colored cactus with its broad, thick leaves had outgrown its
xeriscaped space in my back patio. Every time I moved the garden hose or picked
up dog poop, it attacked my calves or shins and occasionally, an arm. I was over it. So a few weeks later when I had
the yard man over for a little cleanup, I asked if we could move the
succulent—which was pretty, I had to
admit—to the landscaped section of the front entrance to my house, where it
would be out of reach of my body. He said yes, but then Ben says yes to
everything I ask. Just the same, I told him to do it, and while he was at it,
to move another cactus of which I had become less than fond.

Secretly, I hoped the succulent would die. But wishing it
dead made me feel guilty, not just because it was a living being, but also
because I knew it was an expensive plant the prior homeowner had thoughtfully
included in the courtyard’s large raised rock planter. The succulent had
recently sprouted something that looked like a giant asparagus in its center. I
wasn’t sure what it was, but it had grown to about 16 inches tall when Ben
moved it.

As if it had heard my evil thoughts, the damned succulent
did not die. In fact, it flourished in its new spot, next to the stuccoed wall
of the garage, where it got tons of direct morning sunlight. And that central
shoot began to grow. And grow. And grow—much like the fairy-tale beanstalk. One
day a friend casually mentioned something about my “marvelous century plant” and
the light went on in my brain. Of course! That’s
what the plant I’d been calling “that damned succulent” really was! I went
straight to Wikipedia, where I learned that the Mexican plant—with its
persistent myth of blooming only once a century and then dying—in fact could
bloom in as little as a decade, though it would indeed die after blooming. 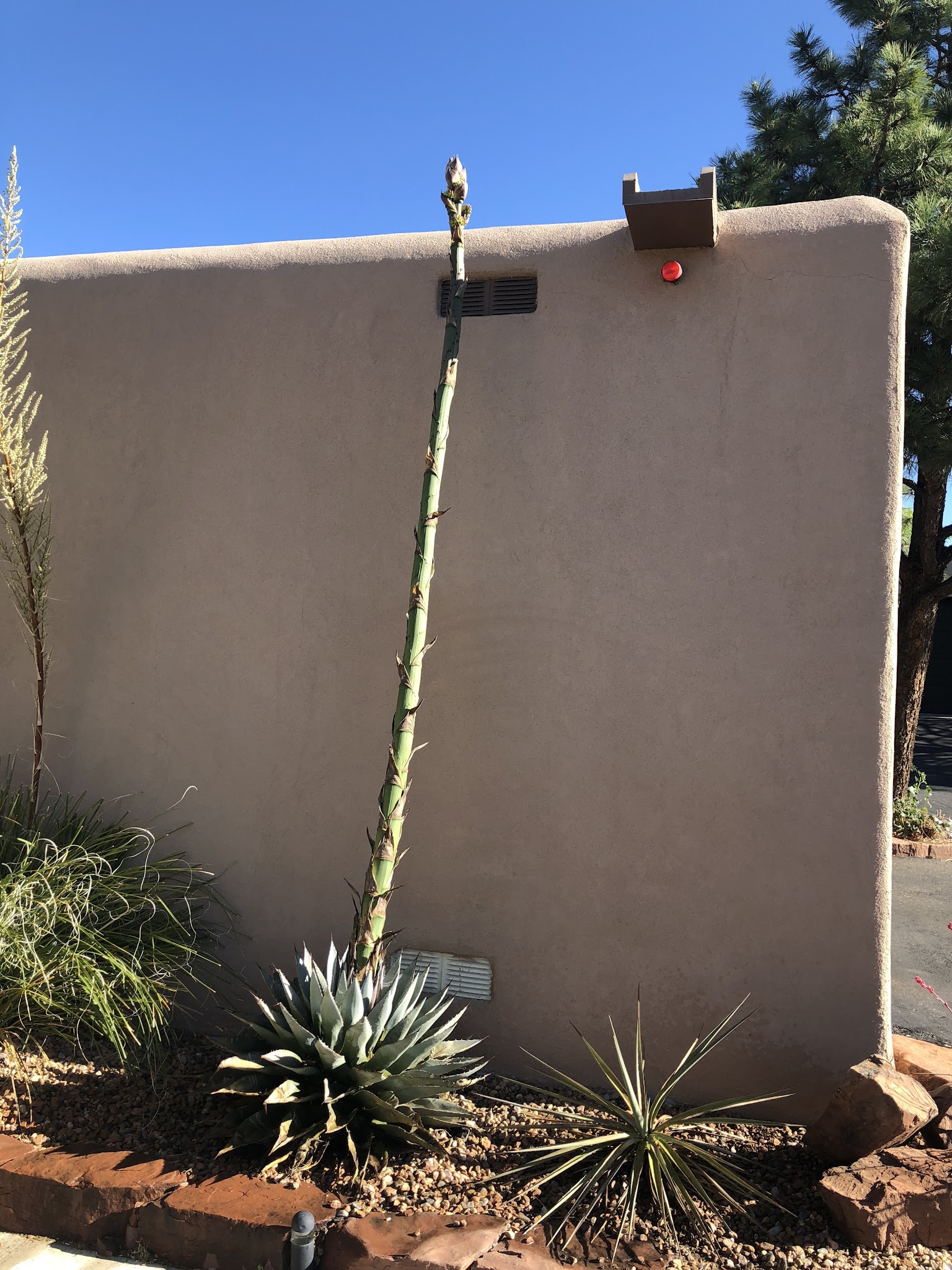 I watched that giant asparagus stalk grow until it reached
the roofline, leaned over, and embraced a conveniently placed canale, a wooden water spout made to
drain rain and snow from my flat-topped Pueblo-style roof. The canale kept the stalk from falling over,
and soon a series of vaguely rose-colored buds appeared at its top.

By this time I was beginning to feel some kinship with my
century plant, but it sure took its damned time to bloom. Another friend
suggested the bud-like protuberances were
the blooms and that nothing more would happen. She also pointed out that
the base of the plant was already dying. Sure enough, it was shrinking, drying
up, the once-fat leaves that had so aggressively attacked me now were becoming limp
and passive.

I maintained faith that the buds would open, however, and
for some reason didn’t bother to look up that information. It was a waiting
game. Each day I would come out of the house and glance upward, where
inevitably the sun shone directly into my eyes. I’d have to walk around a while
to get a viewpoint from which the sun didn’t blind me. Nothing was opening. Day
after day, week after week, nothing happened. The recalcitrant little buds
stayed stubbornly closed. 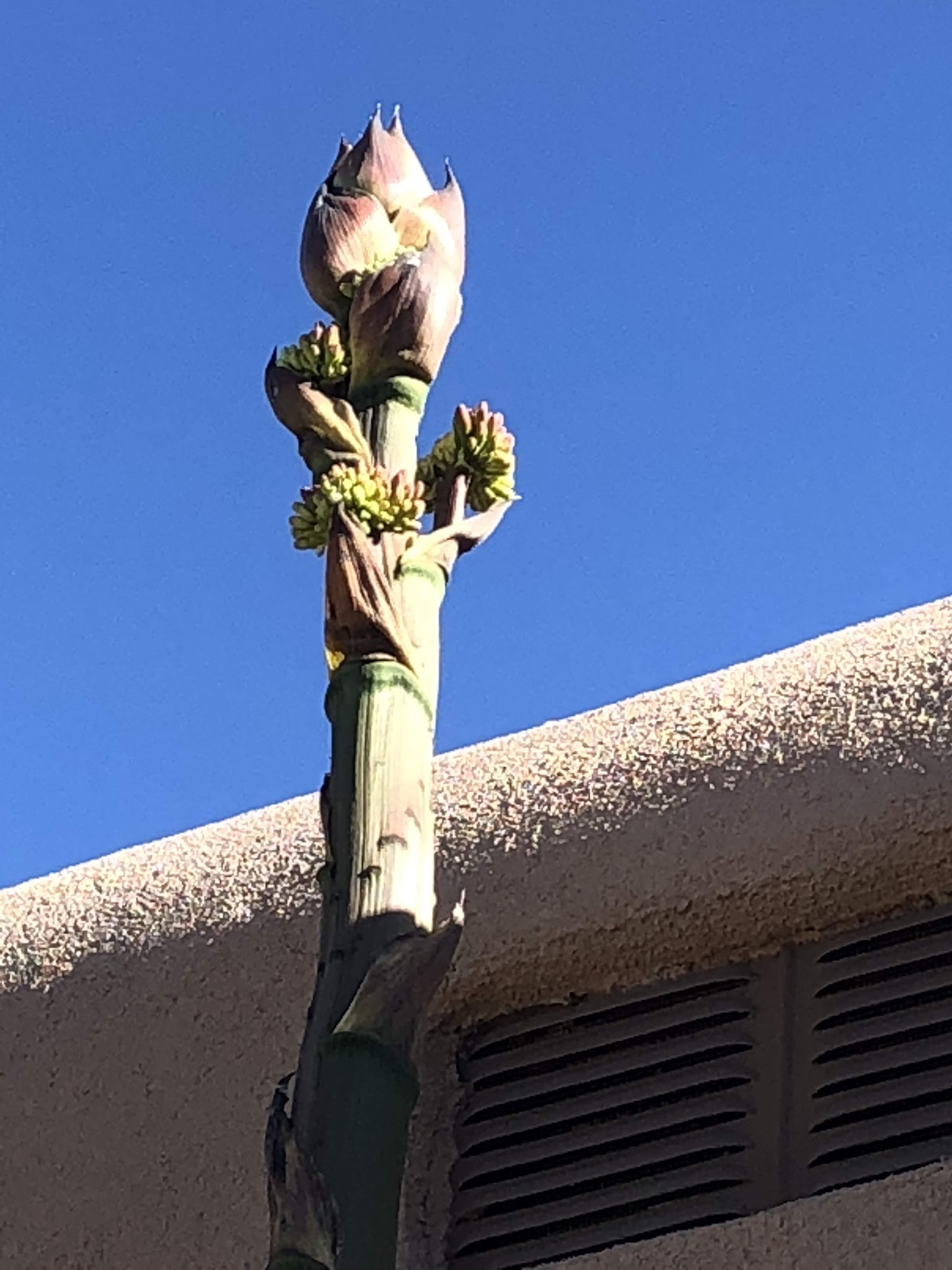 Aha! I thought one day. It’s a succulent, but perhaps it
needs more water to bloom! I watered it. But nothing happened after the
watering, so I promptly dispensed with that theory. Neighbors began commenting
on the giant plant, and I heard myself proudly talking about it as if I was a
century plant expert. “Yes, I’m just waiting for the blooms,” I’d say
seriously, looking up. But what if it died without blooming? What would that
say about the great century plant? About my ability to encourage its growth?
What if it just stopped, and died?

And then, as these things go, one day the buds started
opening, from the bottom up. Out came fragile-looking fluffy yellow things, and
after that came the bees. My century plant was feeding bees! This was a good thing. I was now feeling really
happy about the plant formerly known as “that damned succulent.” Every day I’d
look up and smile at the odd fuzzy blossoms and their buzzing friends. 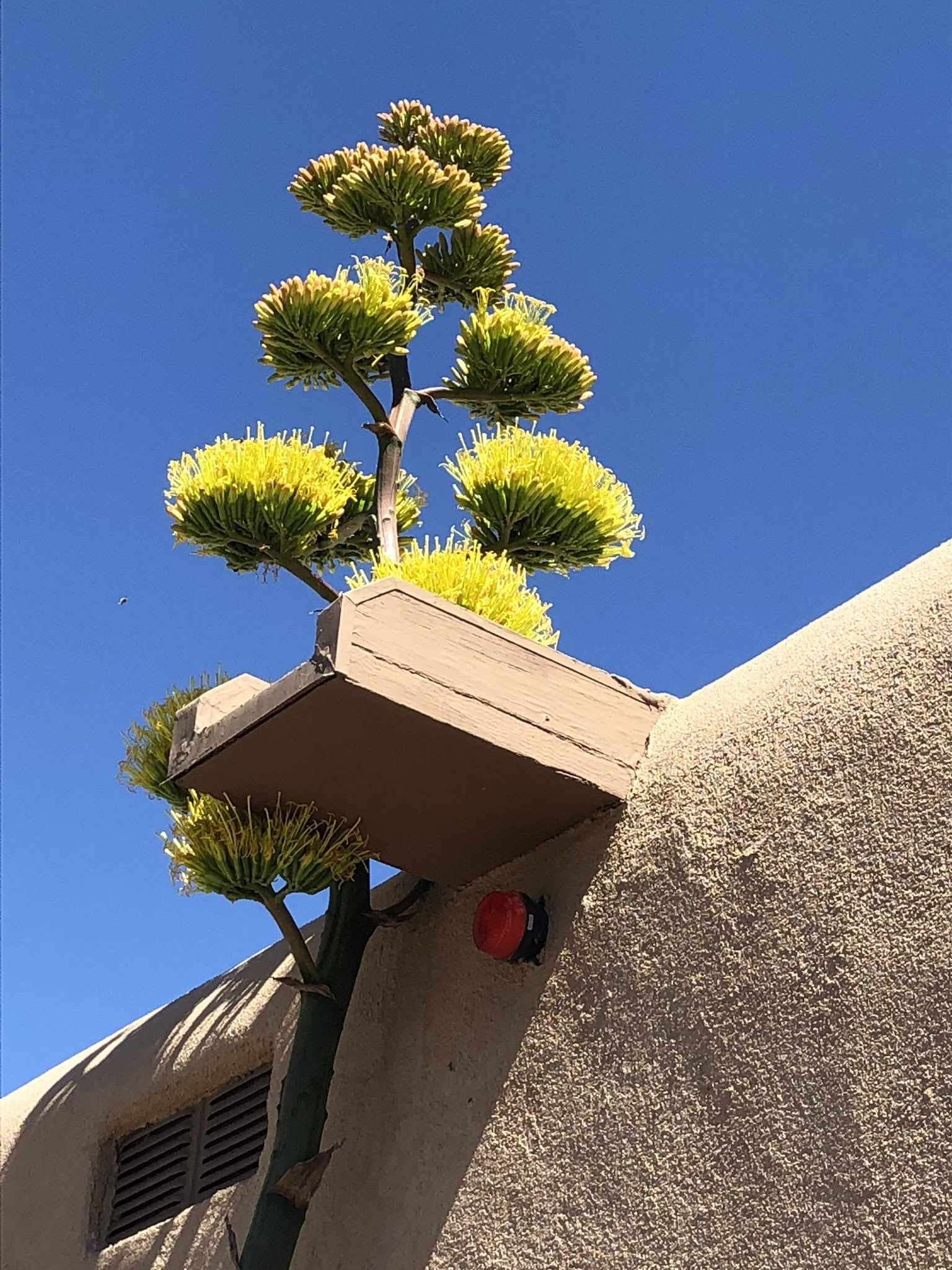 Throughout this time period—altogether perhaps a two-month duration,
from transplant to complete bloom—I was also watching something else equally if
not more mysterious: the final days of one of my hospice patients, a woman of
indigenous Mexican descent whom I’ll call Maria. Each day that I watched the
century plant grow, I witnessed Maria, too, reaching further toward her final blossoming,
you might say.

Few people understand it as such, but human dying is a growth process, when done
correctly, and Maria was doing it correctly. She was very aware that she was a
short-timer. She had done her due diligence, speaking about deep issues with
family members, letting go of people who sucked her energy and offered nothing.
She was as focused and stalwart as that giant stalk, making decisions for
herself until the very last days of her life. She came into her own in a way
that could be disconcerting to those around her, but which I found refreshing:
she knew what she wanted, and how she wanted it, and she was no longer afraid
to ask for what she needed—always with “please” and “thank you,” but without
apology. In her final conscious days, in some ways I suspect she was more Maria than she had ever been before:
more powerful, more loving, more difficult. She was a force of nature. She was
something to witness, like the giant stalk of my magical century plant,
reaching ever upward.

Maria suffered a great deal near the end of her life. When
she was in pain, she let ‘er rip with a yell until the pain was relieved. And
when she was finally out of pain—thank god for morphine!—she nevertheless took
her time before breathing her last breaths. Just as the century plant had been
so slow to bloom, so, too, was Maria’s body slow to shut down. So slow, in
fact, that many of the people who had been buzzing around had to depart; the
process of her death was so taxing, so painful to watch, that they couldn’t
stay. At the very end, only a handful were present, just as only a few bees
kept flying around the very top bloom during my century plant’s last days.

And then, suddenly, Maria was gone. Whatever mysterious
internal clock was at work, it had stopped ticking. 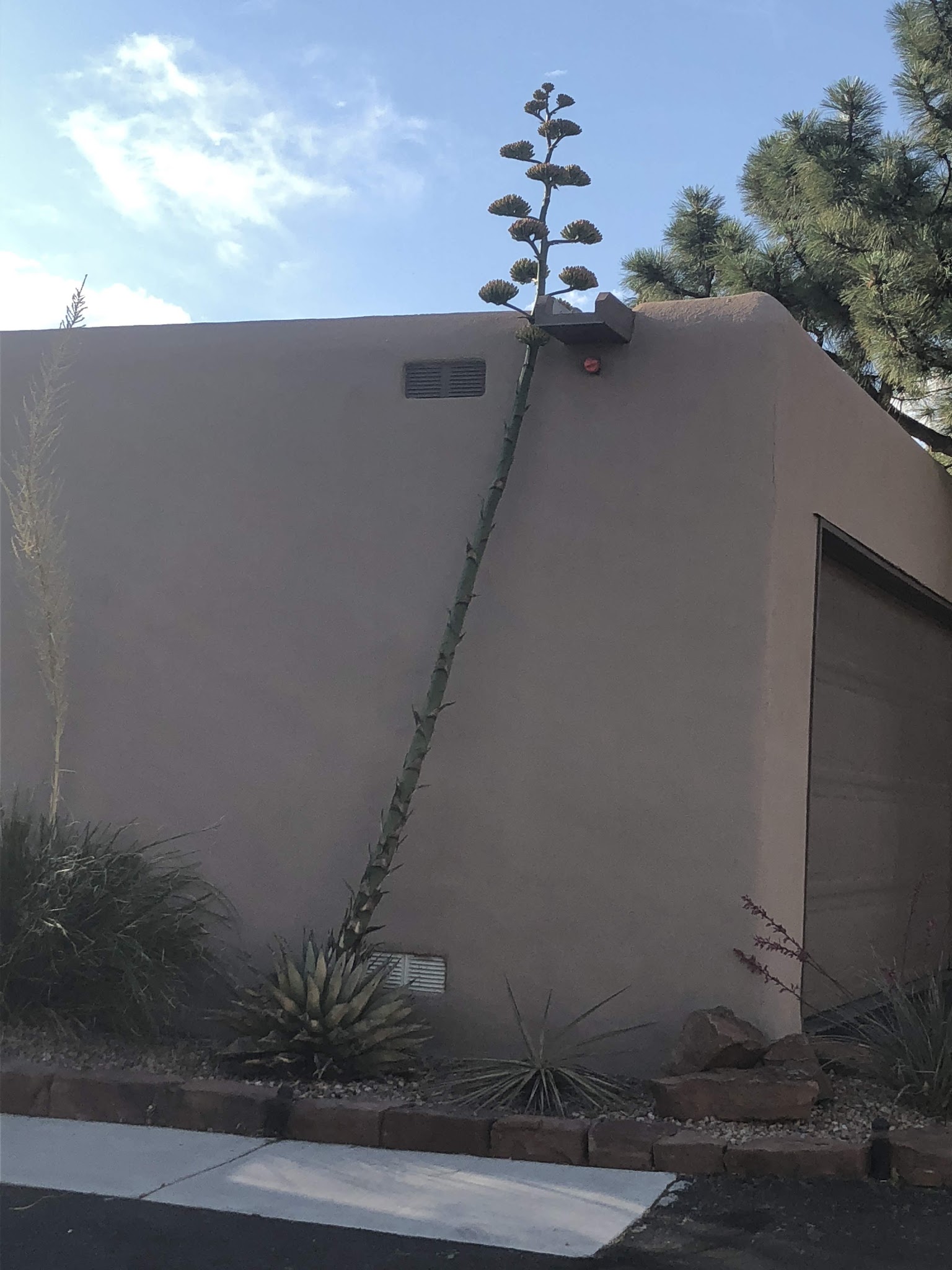 In the days after Maria’s death, my century plant withered
further, the yellow fluff begin to darken and fall to the ground, and I knew its
time had come, too. That damned succulent fooled me all along, poking me into
moving it to a nicer spot, forcing me to pay attention to it. And by the time
its spectacular show was over, I had fallen in love with it; bearing witness to
the final stages of its life was the perfect parallel for the experience I had
been having with Maria.

Oh, and that other cactus I asked Ben to move to the front
entry area? It died almost immediately—even though I guiltily watered it, too.
It had no special shoot, no buds or blooms, nothing to distinguish itself from
any other ordinary cactus. It just withered away and died, unremarkably. I
unceremoniously plucked it out of the gravel and dumped it into the garbage bin
one day. I will not miss it, and probably won’t ever even think of it again.

Not so with that damned succulent, and with Maria. They grew
into death as I hope to one day, with persistence, intention and beauty. Them I
loved, and will miss, and continue to think about, until my own final blossoming. 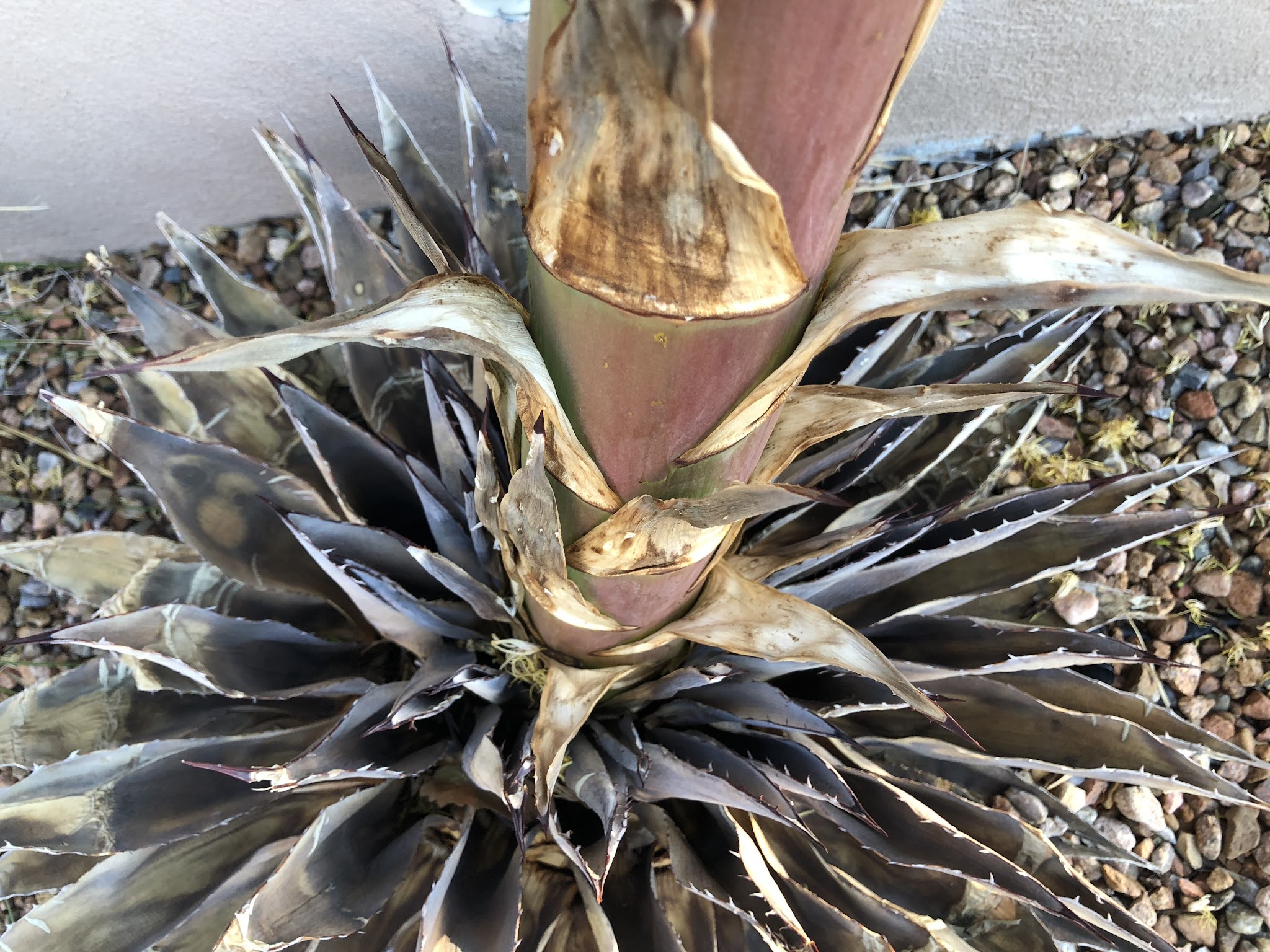 When I finally chopped down the century plant, it was
anticlimactic. I didn’t actually have to chop it down at all; I just pulled the
stalk away from the canale that had
been supporting it, and as I held it, it fell over easily onto the ground. I
got out a little hand-held saw to cut it apart so I could put the stalk in the
trash bin. As it turns out, a century plant stalk only looks hollow; it was
hard, and inside, reminded me of sugar cane. My little saw was completely
ineffectual. A friend was coming over to help me do some household work, so I
called and asked him if he had a real saw he could bring. Instead, he showed up
with a small one not unlike mine, except it was sharp and easily cut through the
stalk. But as I made the first cut, he said, “You know, I have a dumpster at my
shop; I can just put this in my truck and take it there. I assented, somewhat
reluctantly, having expected the process to be a solitary and somehow deeply
meaningful ritual. Shouldering the stalk and nearly rootless stump, he unceremoniously
tossed the whole into the back of his pickup. 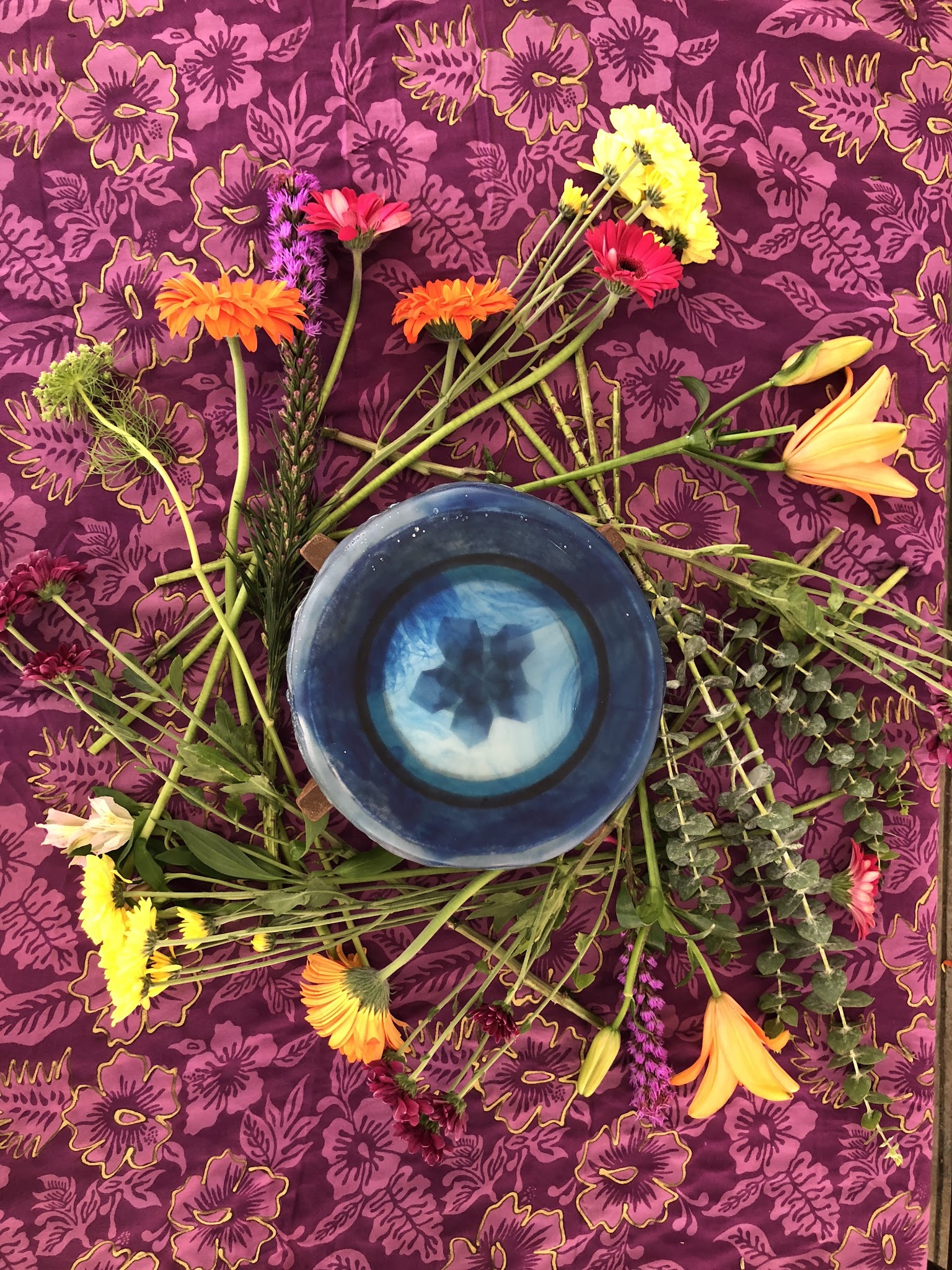 And that was it. In some ways, the death and departure of my
century plant was more authentic than a human death in this day and age. We have
complex rituals designed to buttress our illusions that human death is not
quite so real or final. Whether we send it into the fire or into the ground, we
treat the body almost as if it is still alive until it leaves our sight. Getting
rid of the century plant was in its way a much more real process. What had
animated its existence was now absent; the hard fleshy remains were nothing but
a reminder of its life.

The great naturalist and father of our national parks, John
Muir, wrote, “In every walk with nature one receives far more than he seeks.” Who
would  have guessed that I could
learn as much from a mute century plant as from a beloved hospice patient, and
at the same time?