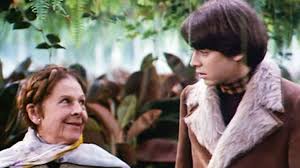 The other day I taught an online class for the seminary I attended—the Chaplaincy Institute in Berkeley, California—which has shifted all of its classes online, like every other higher education institution in the country. The class I was invited to teach was called “Spirituality and Aging,” and as I developed it, I decided to watch as many films as I could that addressed the topic.

Still. . . I decided to watch them. I wrote down the films that showed up on most of the online lists and began to view them, one by one, on Amazon Prime, where some were free and most others were no more than $3.99 to rent.

As you might suspect, many of the movies that made the lists were foreign films. We Americans avoid addressing death when at all possible, and when we do so in films, we unfortunately tend to take the same old narratives and re-invent them with death as a sub-topic (e.g., The Hero, with Sam Elliott: Old actor finds out he is dying but gets the beautiful young chick anyway). They also tend to examine the aging and dying process from the perspective of a primary male character (About Schmidt, with Jack Nicholson: Widower grieves wife, realizes he’s been a jerk, finds redemption.) These are not bad films. They’re just superficial and predictable.

Harold and Maude, with Ruth Gordon, is an exception. This 1971 film, with its unlikely premise (80-something meets 20-something at funeral, forges meaningful relationship) nevertheless looks at many of the real issues of aging: the ever-present threat/promise of impending death and the potential liberation of old age, for starters. If you saw this film when it came out or shortly thereafter, as I did, it’s worth seeing again. I tried to watch it about a decade ago and found it slow and boring; this time around—perhaps because I’m now 63?—I once again found it a beautiful elegy to unexpected relationships and illustrative of the desire for agency, no less powerful at the end of life than in one’s youth.

I can also recommend Trip to Bountiful (1985), which, like Harold and Maude, really does address issues of spirituality and aging without focusing entirely on death, though the specter is present. Starring Geraldine Page and with a young John Heard as her son, Trip to Bountiful examines the deep desire of an elderly woman to return to her hometown one more time before she dies. What she hopes to find, and what she finds, are vastly different things, but we see and come to understand the deep yearnings underlying the fantasy, and how they might be satisfied after all. In my own experience working with elders—and now, in my own 63-year-old heart—I can recognize those unmet yearnings and wonder about their fulfillment as one of what the psychologists would call the “developmental tasks of aging.” We must acknowledge those yearnings and tangle with them, as Trip to Bountiful so beautifully demonstrates.

But the foreign films, oh! I am still savoring their imagery, their complex characters, the questions left unanswered in the final scenes. I had seen only one of these prior to my quest for great films on spirituality and aging, but seeing it in the context of these others made it seem like I was seeing it, too, for the first time.

Amour (2012) is a courageous French film about the struggle of a couple to cope with her illness and decline. I say “courageous” because the filmmaker doesn’t soften the reality of that struggle, doesn’t shirk from the difficulties of feeding, bathing, and changing the demented woman. We feel the husband’s exhaustion and despair throughout, yet it is his total commitment to caring for her that I most remember from those difficult scenes. The light flowing in an open window, a pigeon that flies in—these mythopoetic moments remain utmost in my memory of this beautiful film.

Cherry Blossoms (2008) is the film I had previously seen. A German film set primarily in Japan, it succeeds where Schmidt failed in showing us how a widower comes to grips with his grief for his wife, in part by attempting to embody her desires. Interestingly, like The Hero, this story also involves an elderly man and a much younger woman, but in a meaningful perspective, symbolizing (through butoh, the traditional Japanese dance form) the dance between youth and old age. This is a breathtaking film with many layers of meaning that deserve to be plumbed in multiple viewings.

The Farewell Party is a 2015 Israeli film featuring spectacular ensemble acting. A group of residents of a senior center unwittingly become a team that provides aid in dying to their fellow residents who want to hasten their own departures. This unlikely collective is able to do what the individuals cannot: they effect a rescue of the most helpless of their own, risking everything themselves in the process. It occurs to me now that the collective-versus-individual subtheme of the film is an especially appropriate reflection of Israeli culture, but the notes I wrote down said “compassion,” “somber,” and “sacred.” Alas, if this film had been made in the U.S., it would have ended up a comedy.

Poetry is a 2010 South Korean film about a woman who wants to write poetry, and takes a poetry class that challenges her to see the truth. As a result, she makes a series of difficult but courageous moral choices. This film addresses sexism and ageism, but it is its focus on creativity as an avenue for self-expression and the release of suffering that is most extraordinary. Few discussions of elderhood, in film or other media, examine this most essential component of spirituality and aging. Poetry does it with exquisite subtlety and beauty.

Last Cab to Darwin (2003, Australia) is based on a true story and was originally a stage play, but doesn’t carry that pacing or weight from which some films based on plays suffer. A cab driver learns he has stomach cancer and sets out on a pilgrimage he believes will end his suffering. It’s clear his main goal is to escape his feelings, but in the end must face them anyway. This particular issue is a common conflict faced by many older men, and Last Cab to Darwin lovingly illustrates how the confrontation with emotion empowers rather than weakens the masculine within.

A Man Called Ove is a Swedish film (2015) that, like Last Cab to Darwin, is described online as a “comedy-drama,” but the alleged “comedy” is but a subtle sense of irony underlying an otherwise powerful tale of self-discovery. The theme has much in common with that of Darwin—an elderly male forced to contend with the emotional repression that has served as both refuge and torture. Like the protagonist in Cherry Blossoms, the ornery and unlikable Ove rediscovers himself through relationship to a younger woman, ultimately redeeming himself by connecting to his own humanity.

During the years I worked as a chaplain with the dying, people often said to me, “How can you do that work? It must be so depressing.” There was no way to explain to them that, though I felt sadness at the deaths of my patients, the work itself was anything but depressing. Never before had I felt such deep connection to other human beings as when I sat with the dying.

These films are the same; sometimes sad, but not depressing. They expose some of the deepest of human struggles and emotions. And though they reveal no secrets, no surprise endings, without fail they celebrate the resiliency of the human spirit and the sacredness of the soul. Maybe you won’t want to watch them all, as I did, but try at least one you haven’t seen before. You won’t be disappointed.