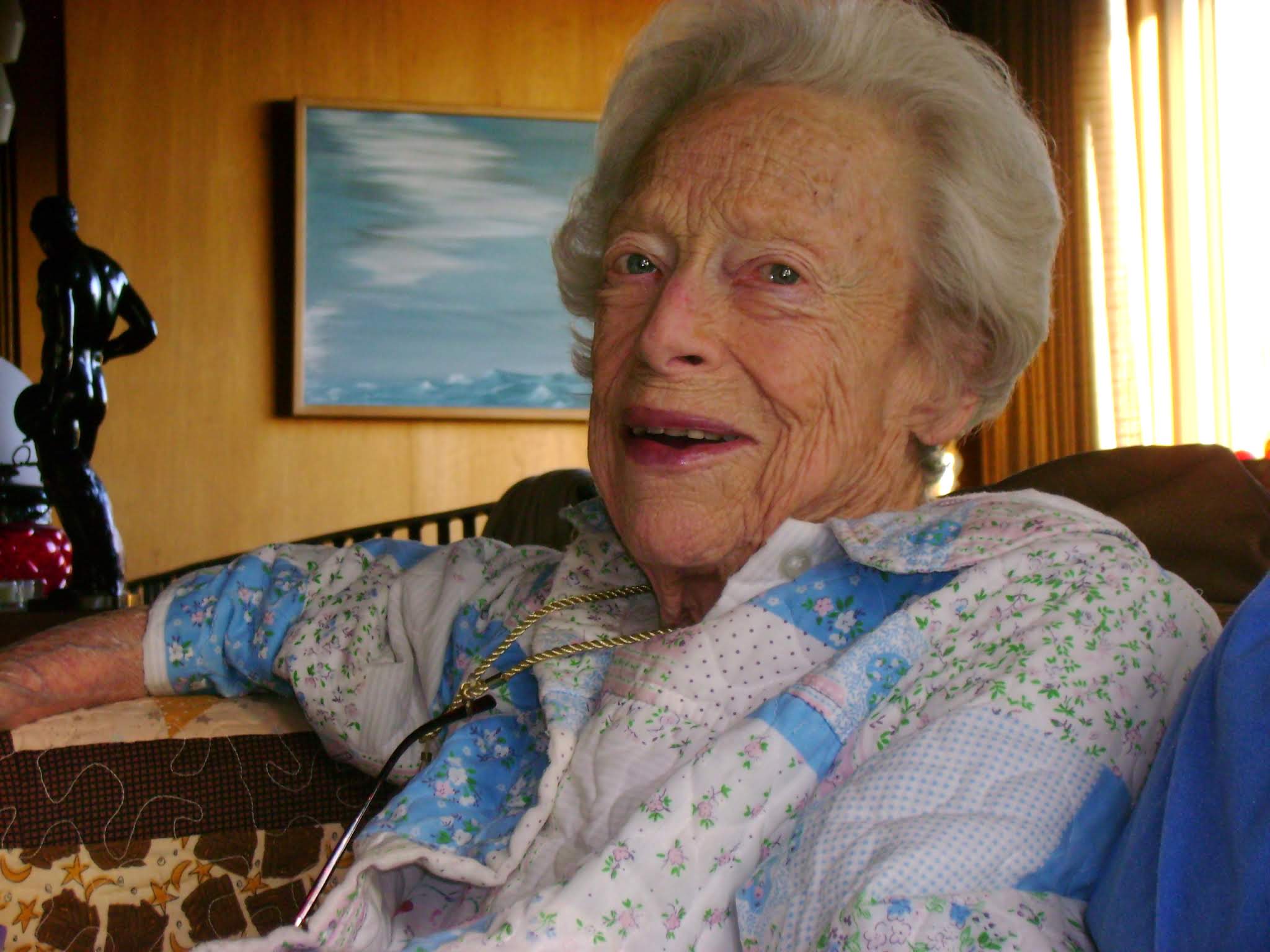 I have been thinking about Beth lately. Beth was my neighbor in the Berkeley hills for a few years in the mid-2000s. She was, in a way, my first hospice patient, although I wasn’t yet a chaplain when we befriended each other. She was, however, one of the reasons I became a chaplain. But that’s a story for another time.

Beth was in her mid-80s and had terrible COPD. Yes, she had been a smoker. She also had survived an early colectomy, the removal of part of her colon, in her 60s. Though she had expected to die soon after the life-saving surgery, to her own surprise, she was still alive some 25 years after the fact.

When I met her, Beth was living alone in the house next door to me and my then-partner, able to leave only about once a week to get to the grocery or the doctor. Like many houses in the Berkeley hills, hers had two flights of stairs outside from street level to the front door, and she had to ascend another flight inside to get to the main floor of the house. It was tough going for a healthy individual, much less someone in Beth’s condition.

Beth was very sick. Most of her friends were as elderly and infirm as she was, and the rest were dead. Her only family was a loving, adoptive bunch that lived several hours south in the Bay Area and so could not visit often. She was about as isolated as a person could get.

But Beth’s brain was sharp as a tack, probably due in part to the fact that she did the New York Times crossword puzzle daily and watched Jeopardy! without fail every weekday. She was also an avid reader. With the exception of Jeopardy!, she rarely watched TV.

I could write an entire book about Beth, but the reason I’ve been thinking about her lately is her frugality. Beth had grown up on a hardscrabble farm in eastern Oregon. She was born just after World War I, which of course was followed by the Great Depression. Her early life was very tough, and tougher even than most children’s of that time. She once told me, without emotion, that when she was a child and misbehaved, her father would tie her to a fence post and leave her there most of the day.

But Beth was a survivor. She not only survived, she thrived. She managed to get herself educated and had a satisfying career, as administrative assistant to the University of California Board of Regents. By the time I met her, she had long been retired and her husband was long dead. While she was not wealthy, her house was paid for and she had enough to get by.

But the impact of those early years stayed with Beth. During her childhood, having too little was the norm. President Calvin Coolidge had advanced a slogan that later morphed into the one Beth shared with me one day: “Use it up, wear it out, make do or do without.” Probably most elders over 90 today also remember that saying.

And Beth was still abiding by its message. She kept every piece of paper and envelope that came in the mail to her and repurposed it for scrap paper (there’s a reason we call it “scrap paper,” after all). Her grocery lists and every other note to herself were written on those scraps. She washed and re-used the plastic containers her frozen dinners came in. She recycled everything assiduously. And in the few years I knew her before she died, I never saw her come home with a package of anything new except food and medicine.

“Use it up, wear it out, make do or do without” was her way of life.

My mother Evelyn was much the same. A little younger than Beth, she, too, had grown up on farms, though she lived in Kansas as a child. Her mother, who for the most part was abandoned by her husband, supported them as a domestic worker on other people’s farms.

When my sister and I cleaned out my mother’s house for an estate sale last year, in the drawer below the freezer, we found among the other rags a pile of white cloth diapers—my sister’s and mine—that Mom still used for dusting and cleaning mirrors. Some of them were 65 years old. And still perfectly usable.

My mother saved rubber bands from the newspaper delivery on an empty tomato can. She saved plastic bags and paper bags before anyone ever thought of government-sponsored recycling. She saved every last tablespoon of leftover vegetables, which all ended up in a soup or stew. She darned socks.

Of course it helps to have some extra space if you’re going to save and re-use a lot of stuff. And it helps to have time to make or fix things, and one must have the skills to do so, which, sadly, are quickly disappearing in our technological era. 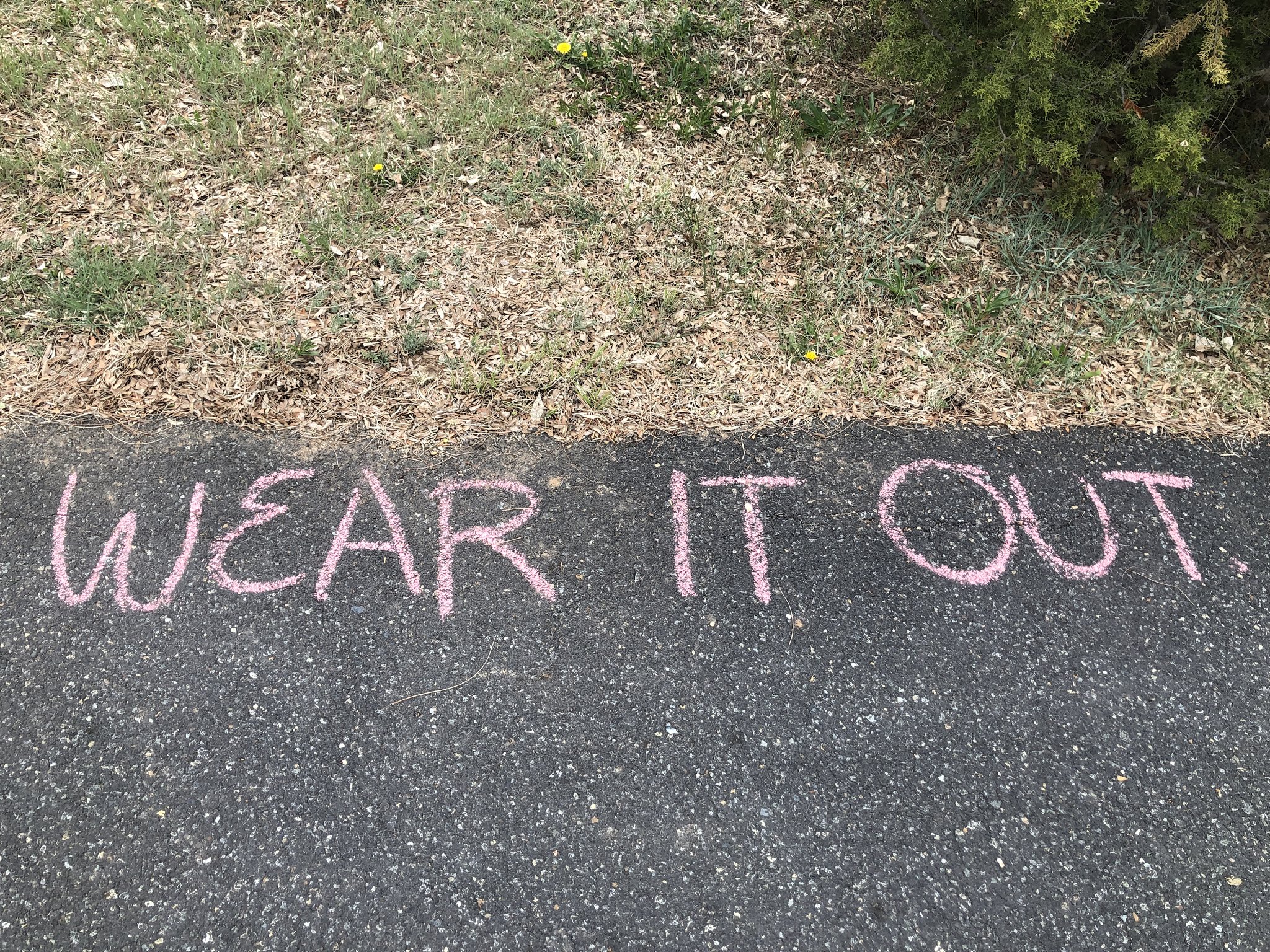 But still. My obvious point is that previous generations of Americans have suffered through many crises that lasted longer than the current pandemic is likely to last, and that demanded of them much more in terms of sacrifice. Food and other products, like tires and steel, were rationed or simply unavailable during the world wars. Americans put their used kitchen oil in cans or bottles out at the curb for recycling in the explosives manufacturing process during World War II.

Many of us Baby Boomers, and those who have come after us, are blithely unaware of what it means to do without. The phrase “make do” is hardly even used these days. Not being able to acquire what we want when we want it—whether it is food, or household products, or getting the dog groomed, or the washing machine fixed or having a massage—these are “first-world problems,” as the saying goes these days.

Of course many people have not experienced that level of privilege in their lives. The poor, many people of color, immigrants and others do not have the ability to meet even their minimum needs in terms of food, shelter, health care. Today’s crisis of acquisition brought on by the coronavirus isn’t new to them—it’s just worse. 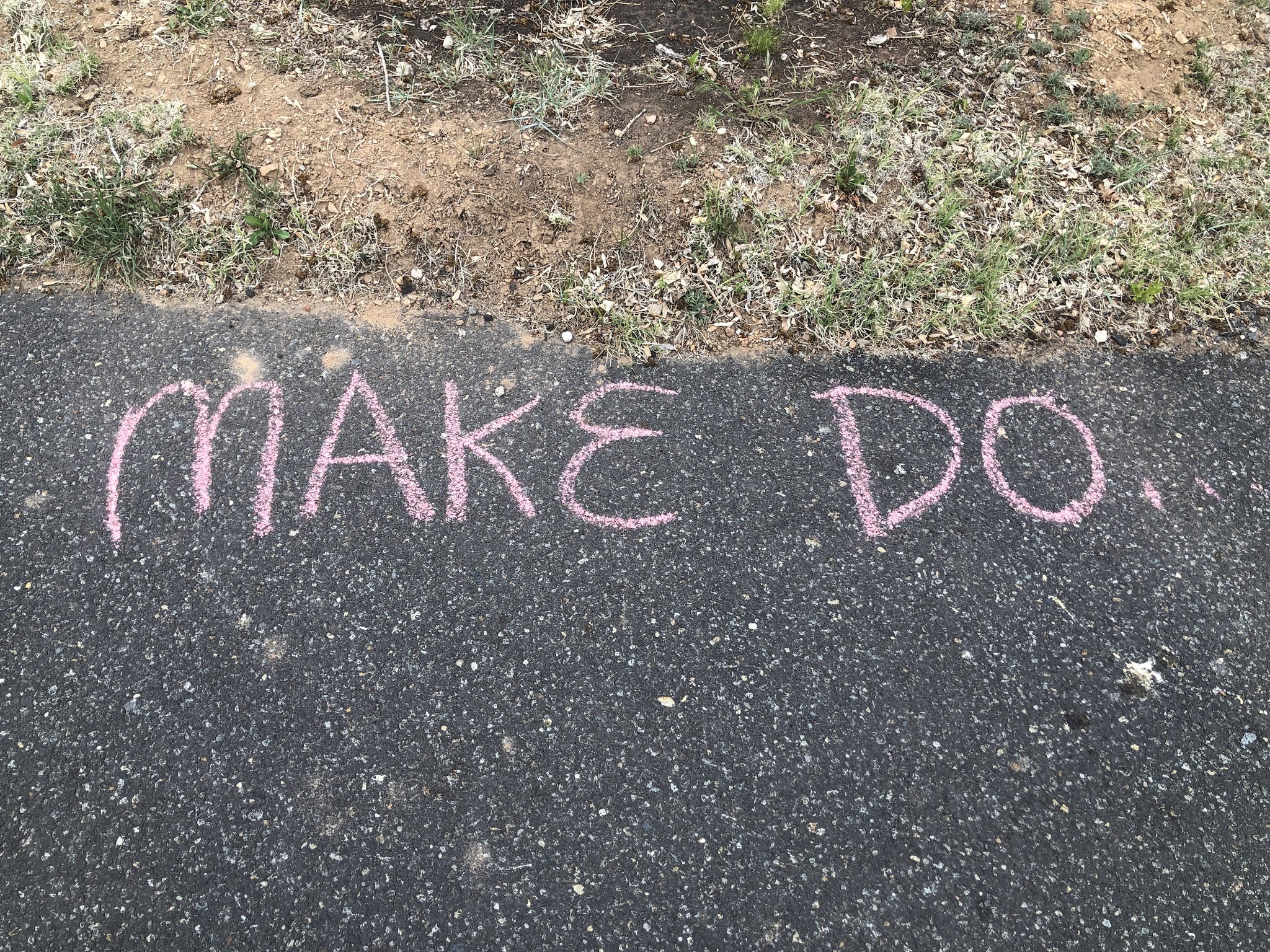 So how do we not go down the rabbit hole of despair with all of this?

I think for me the answer lies in appreciating the ingenuity of those who must live without all of the time. Anyone who’s ever traveled in third-world countries surely has marveled at what can be made of the detritus of life. I remember seeing in Cuba in the mid-1990s that American automobiles of the 1940s and ‘50s—whose siblings were now but rusted-out heaps in our junkyards—still dominated the roadways. Those who visit the International Folk Art Market held here in Santa Fe every July have likely admired the purses made of aluminum flip-tops, bowls woven of recycled colorful electrical wiring, bags created of chewing-gum wrappers.

While we do see this kind of ingenuity these days in the “makers’ movement,” it has not been integrated into American society at large. We are still consumer-driven, and we seem to believe that only a return to the consumer-crazed life we have known for the past 75 years since the end of World War II will rescue our economy and our society. 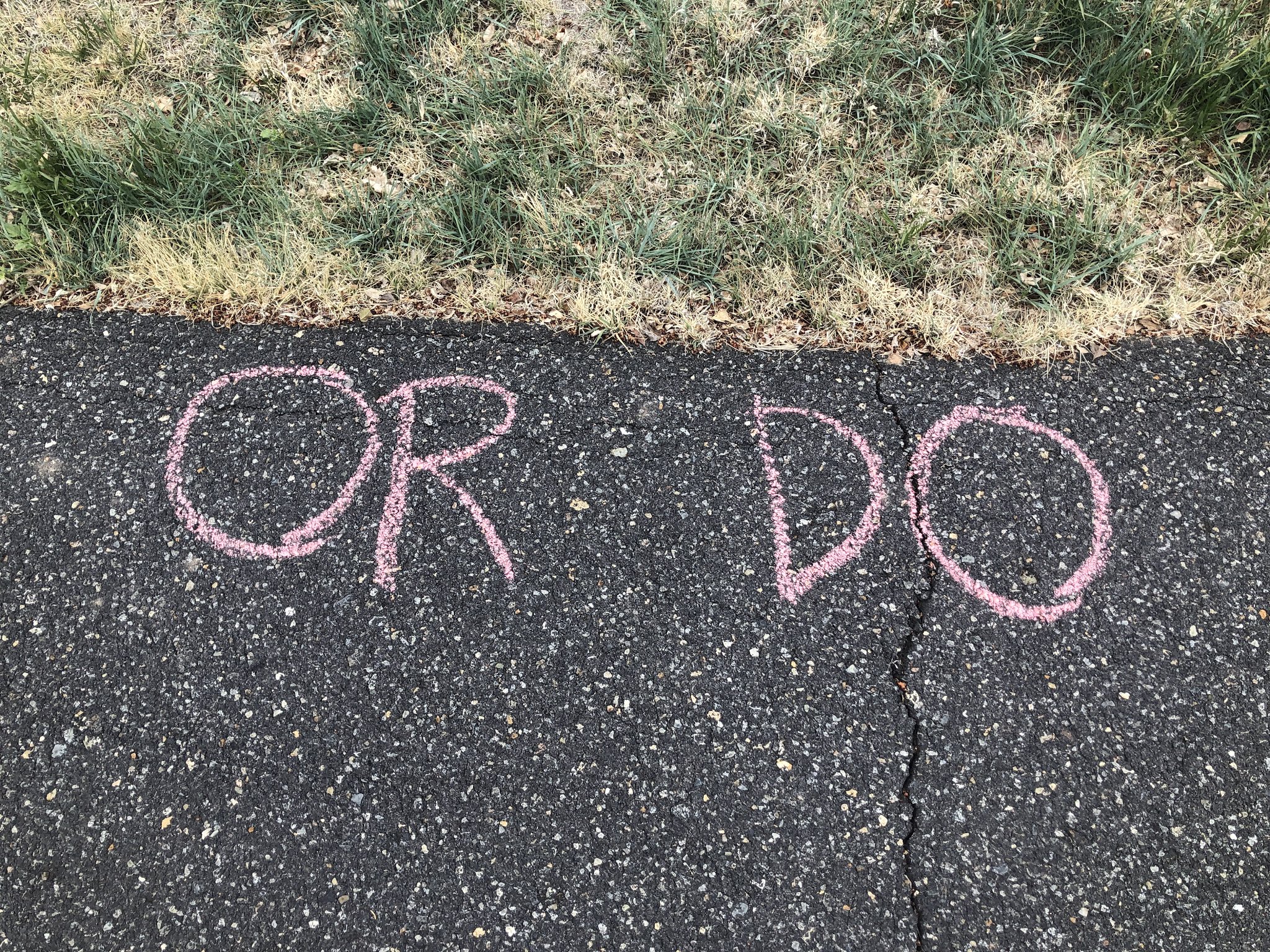 But what if part of the “recovery” that’s already being touted by politicians—although it’s clear the crisis is not yet even over—was a focus on living more sustainably? I’m serious here. I’m not talking about just buying an electric car, or putting some solar panels on your house. I’m talking about a larger shift in the way we think about things and our use of them—not only to reduce the impacts of climate change, or because we’re broke, but as a chosen value. What if each bite of food, each garment, each household appliance, was treated as if it were a sacred part of the chain of life that connects all things? 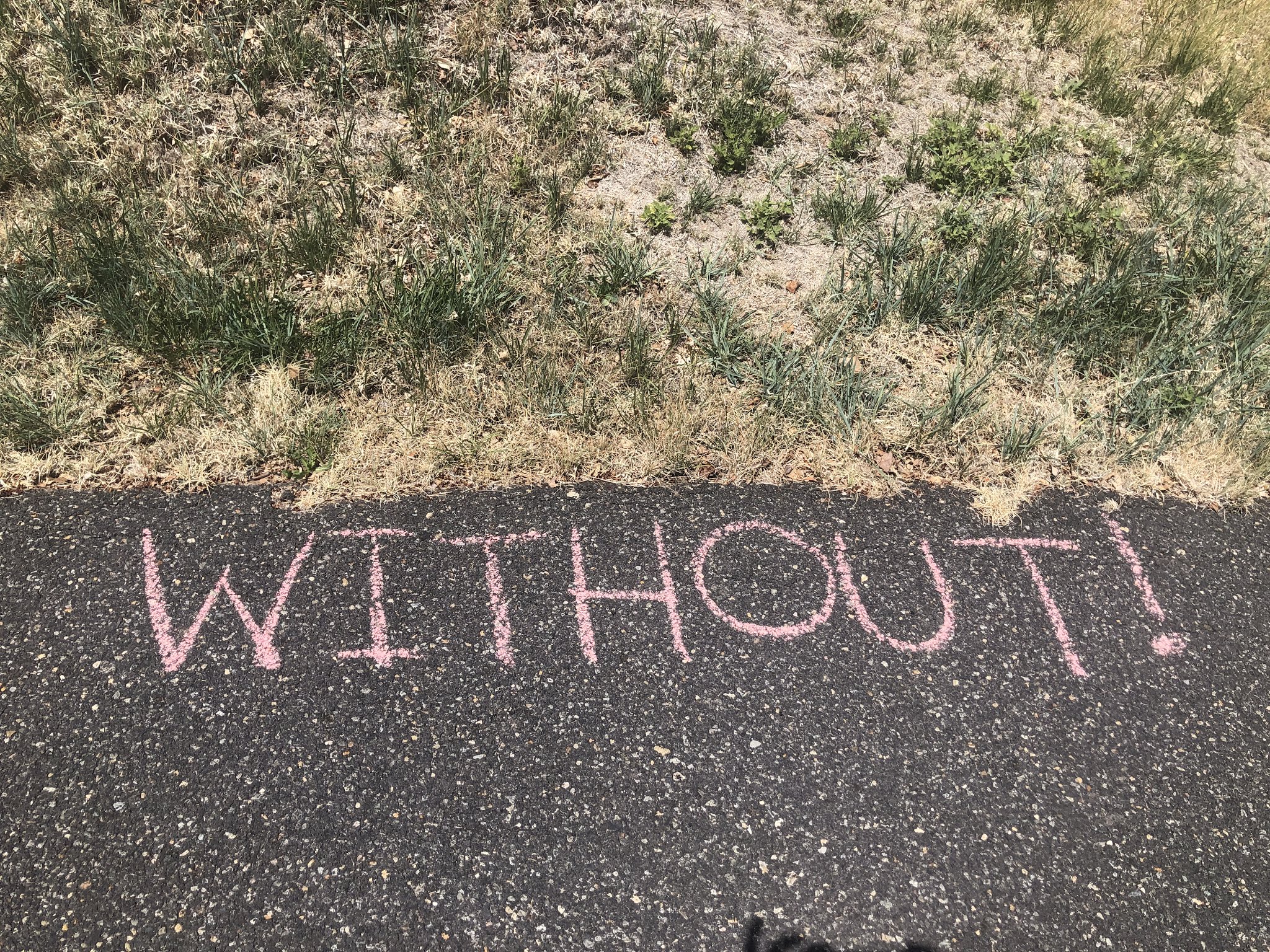 I’m not talking about religion—although if you’ve got one and want to engage it here, good on ya—I’m just talking about the recognition that all is connected, and that to waste that which we are lucky enough to have is just morally wrong. Instead of choosing to trash something because it’s cheaper than getting it fixed, what if we chose to fix that object (or better yet and if possible, figured out how it fix it ourselves) just because it’s the right thing to do? Because it honors the object, those who made it, the earth that provided the materials?

Beth has been gone almost 11 years, but I still think of her all the time. What would she be saying about living with the threat of coronavirus? The closest I can get is, “Pooh. What’s the big deal?”

What Beth taught me was much more than just an historic slogan. It was, and remains, a blessing. May we all learn to “Use it up, wear it out, make do or do without.” 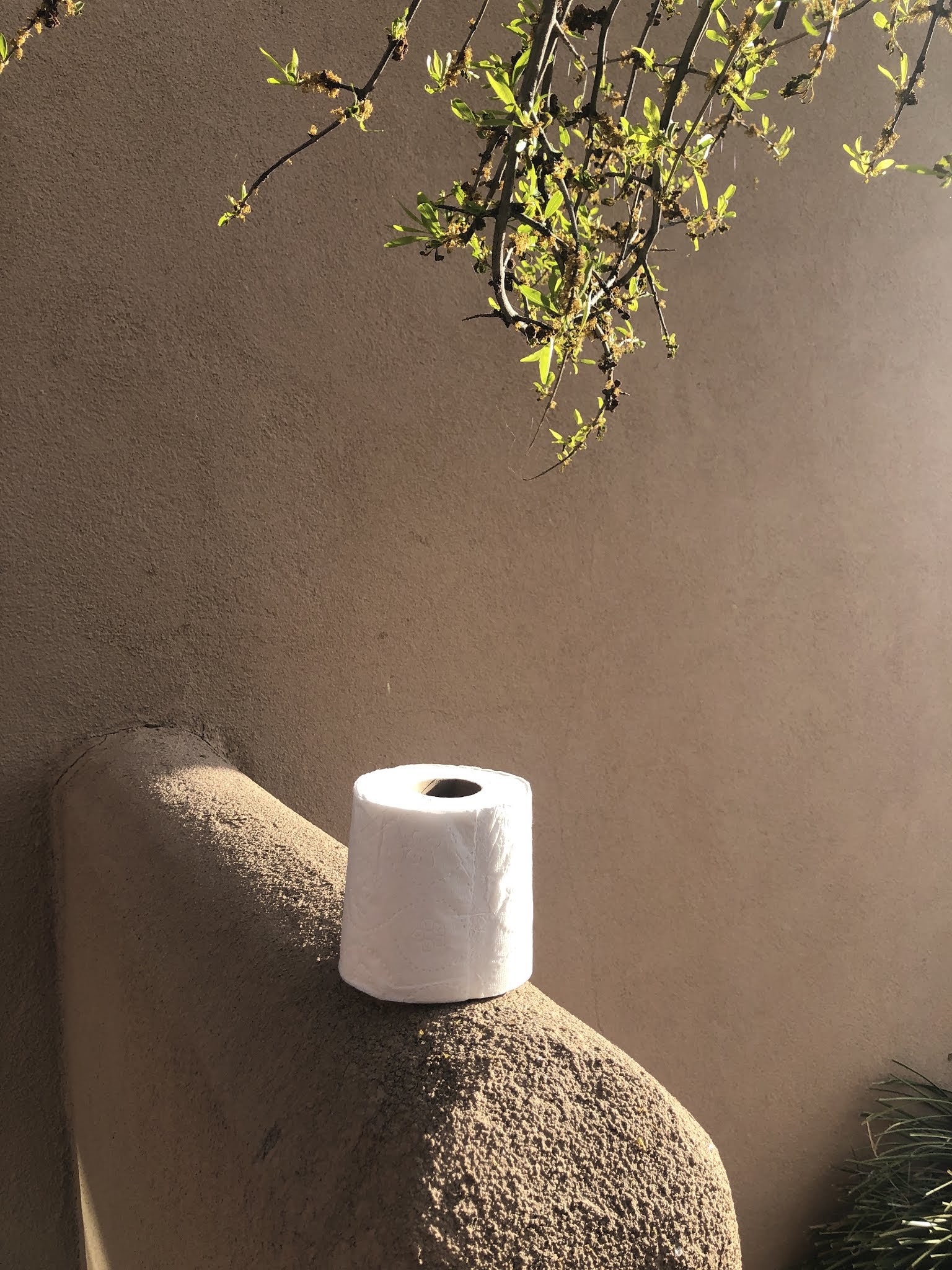 P.S. Someone—possibly someone who read my blog about toilet paper—left a roll balanced on my stucco wall at the front of my walkway this morning. I laughed out loud. Thank you, Anonymous Pixie, for your donation to my stash!

I Am Really Angry